Honey, How Do We Tell the Kids We’re Moving?

I was four years old when my parents moved from Raleigh, N.C. to the mountains. Like most four-year-olds, I didn’t have a lot of say in the matter. No one asked me if I wanted to leave behind my little sandbox, and the green bean vines under which I’d found a bunny, or my Strawberry Shortcake-decorated room.

Dad got a new job. We were moving. I didn’t get to say no, but my parents did their best to involve me in the process.

“Tell children as soon as you know for sure that you are moving,” writes Marie Hartwell-Walker, Ed.D. on Psych Central. “Kids know when there are secrets. Kids worry when they sense that the adults around them are upset or unsettled. When kept in the dark, what they imagine is going on is usually far worse than the reality of a move.

Dad had to leave Raleigh before my mother and I did. His new job had already started. So my parents hired movers — let’s just say they were guys less sophisticated than Tom and Todd who own T-N-T Moving Systems — to help empty out the house. 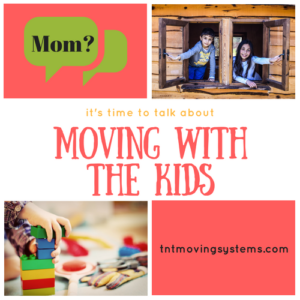 “It’s tempting to use packing up a house as a time to purge unwanted belongings or replace worn-out items with new things for the new house,” Hartwell-Walker writes. “It’s fine to do that with your own stuff. But young children often are attached to that broken doll, that shabby blanket, or the child’s bed they have almost outgrown. Especially with children ages 2 to 7, it’s usually better to keep their familiar things and sort them out well after a move. They need the familiar to feel that all is right with the world. A happier kid is more important than a better bed or a new blanket.”

One of the movers found me in my room just as I was unplugging my Bugs Bunny nightlight and contemplating just what exactly would happen if I stuck my finger in the electric socket like Mom had always told me not to do. The moving man yelled at me, which actually startled me less than the fact that a strange man was standing there in my doorway all dressed in black and sweaty. What was once familiar was becoming increasingly strange.

Moving can be a stressful activity for anyone at any age, but young children have unique needs rooted in security.

“Packing with children underfoot can be frustrating,” Hartwell-Walker writes. “But young children do better if they have some control over at least their favorite things. Spend some time together packing a box of their most treasured items. Make sure that box is available to be opened right away when you get to the new place. Once they understand what packing is about and that their most special possessions won’t be left behind, they will be less upset if you do the rest of the packing while they are at the babysitter’s or at school.” 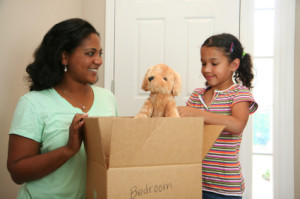 I remember only one thing about driving across the state to the tiny university town where we temporarily moved in to a low-slung brick ranch: there was only one traffic light. One. In Raleigh there were too many to count. I wondered mightily just what my parents had gotten us into.

A few months later, we moved again. This time it was just a local move. We left our brick ranch rental and headed for the house my parents had custom built. The red clay dirt must have been still to fresh and raw and the house too new for my parents to welcome a gaggle of five-year-olds, so we held my birthday that year at McDonald’s. It was 1985. There was a cake with white icing and hard, dyed sugar molds of Ronald McDonald, Grimace, the Hamburglar, and Birdie. I loved that cake.

Our move, or moves — depending on how you look at it — turned out pretty well, at least from my perspective. The brick ranch we rented was in a line with two o

ther brick ranches, and in the middle one lived the Leonard family with their three kids, and the Schulman’s garage kind of capped off a little cul-de-sac. The Schulman’s had a parrot and a daughter named Leslie.

Just before we moved in to our bigger house, we’d met some of our new neighbors, the Allens, as they had walked up the hill to come take a gander at the house under construction. They had two daughters one of whom was my age.

For some kids though, moving doesn’t go as well.

“Don’t forget that the move is a major change for your kids and they may react in unexpected and uncharacteristic ways,” Hartwell-Walker writes. “Some kids get irritable. Some seem to regress. The child who proudly gave up his pacifier or blanket 6 months ago now cries for them. The kid who was doing so well in first grade before now seems stuck. The third grader who couldn’t wait to leave in the morning now lingers with you and has “stomachaches.” Some older kids seem to do fine in the initial months after a move, then seemingly out of the blue, have a major meltdown. Make room for feelings. Take time to listen and to reassure and to help them solve their problems. Each kid’s adjustment will happen at his or her own pace. With support, reassurance, and practical help from you, they will do fine.”

And then. They sold it. And they moved.

It’s an entirely different feeling to be the adult child of parents who are leaving “the family home place.” For me, I was torn between loving the house and the land that was so familiar, and seeing that, after 25 years, my parents weren’t as keen on a three-story house with the bedroom on the top floor and the laundry in the basement. As our lives change, our needs change. My nostalgia was less important than my parents’ comfort.

But it wasn’t easy. As Mom had cleaned out the closets, I suddenly had to decide what to do with the Cabbage Patch doll I’d named after my cousin, and the travel case of half-naked Barbie dolls, a trove of Make-It-And-Bake-It sun catchers, old report cards, my piano, and dozens of other things that had somehow been ferreted away over the past three decades.

“Letting go of a childhood home is particularly hard,” writes Carry Tennis in Salon. “As children, we often dream that the house will be ours legally and financially the way we have always thought of its being ours spiritually. So that way the spiritual, the emotional and the financial could come into harmony. But that is not what happens with real estate.”

Thomas Wolfe, a North Carolina author, was on to something when he wrote, “You Can’t Go Home Again.”

It is necessary then to find a way to say goodbye. Perhaps we save a handful of soil or transplant ancient flower bulbs. Maybe we audibly tell the house thank you for the role it has served. Or in some cases, we may need to tell a place that we are happy to be moving on.

“Be empathetic toward these complex emotions,” said Travis Bradey, MA, NCC, LPC, LCAS-A, who is a Licensed Profession Counselor in the Mooresville area.

Once you do say goodbye to the past, it’s important say hello to the future.

“When you are settled and feel comfortable, it is a great time to formally acknowledge a life change and find a way to include each person in establishing a connection to the new home,” Bradey said.

No matter your story and whatever the reason for your move, T-N-T Moving Systems will help make it as easy as possible for you. Call 704.523.1455 or visit tntmovingsystems.com to talk about how to take the next step in your life’s adventure today.

Share This Story, Choose Your Platform!
June 29, 2018 by admin in Charlotte Movers, How to prepare for a move, Moving Tips, Why We Move Comments are off
Tagged with: Best movers in Charlotte, charlotte movers, moving with kids, moving your parents, new home
© 2015 All Rights Reserved. Web Development by CCP Web Design.