Fall is the most cost-effective season to move 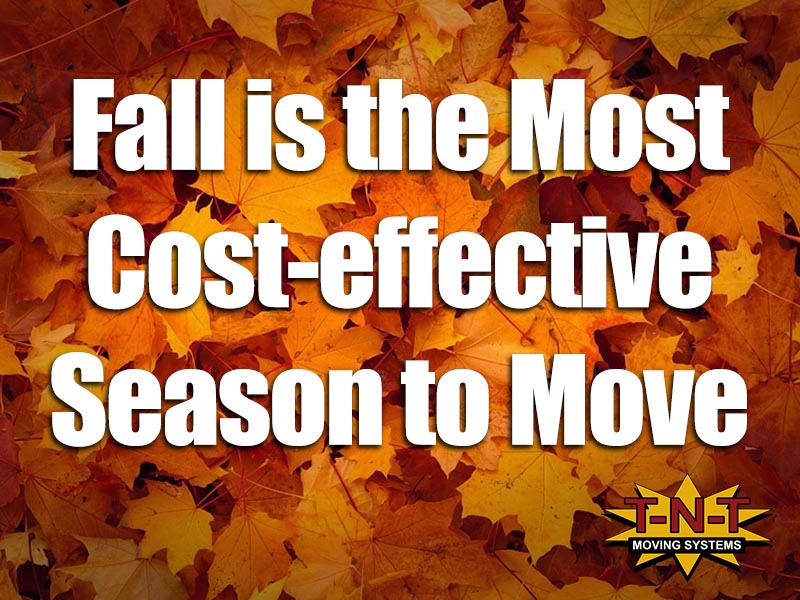 Did you know that there are certain times of the year, month, and week that can make it easier for you to move into your next home? Whether you’re preparing for your first move or if you’re a seasoned mover looking to improve your strategy, TNT Moving Systems is happy to let you in on a few insider secrets that can help you out for your next move. The value you can gain from saving time and stress by hiring a moving company can actually match the value you’ll experience by saving a lot of money.

The reality is that leases, new jobs, or exciting life moves like moving in with a significant- other don’t always coincide with the right season or your planned time off. That’s why hiring a moving company can help you at any time of year and lessen any stress you might have about moving.

If you’re stressing about moving in the fall, on a weekday, or the middle of the month, let TNT Moving Systems reassure you that fall can actually be the best time of the year and the most cost-effective season for you to move.

Starting with the basics: What’s the peak moving season?

Peak moving season begins in April and usually ends around September. On average, more more than 40 million people move each year in the United States, and 80% of those moves happen during the peak season.

What are the busiest months to move?

Moving companies tend to be in the highest demand during June, July, and August.

What’s the best season to move?

The best months to move in are November through January, particularly ending around New Year’s, though some extend that range from mid-September through April. These estimates are based on the demand that slows down for movers during this time frame, and moving companies lowering their rates as a result. Most moving companies can agree that the range of mid-September to the end of December are the lowest demand periods.

Falling temperatures, falling leaves, and falling prices make fall the best time of the year for our clients to move with us. College kids are settled into the new dorms and apartments, families have typically moved during the summertime to adjust children to a new school district before the start of a school year, and the moving companies’ schedules are slowing down.

So let’s start with the big picture. If we look at the entire year and try to determine the best time to move, fall is actually the cheapest season for those using moving companies. Typically, moving companies are the least busy during the fall season, with summer months having the highest demand. As a result, lower demand can mean lower prices for those looking to move. As a client, you’ll have the advantage of receiving multiple bids and estimates, and have the ability to choose a moving company based on reputation and schedule, rather than just the lowest hourly rate.

Because so many students use moving companies as they head to college, the best time to start seeking out moving estimates and planning a move-date is in late September.

Moving in the fall can give you more flexibility to choose a date that works for you, rather than being squeezed into a day that works for the moving company. Plus, in the fall, there will be far more coveted Saturdays open in October and November instead of July or August.

Compared to summer, winter, or spring, fall is a time of year when the weather around Charlotte, NC is the most moderate, and there are the fewest bad-weather scenarios. There’s little chance of a heatwave, spring showers, or a blizzard. Inclement weather isn’t fun for anyone involved in a move.

While the majority of families move during the summer to avoid resettling children in different school districts, moving in the fall can also have advantages for children. At the beginning of a 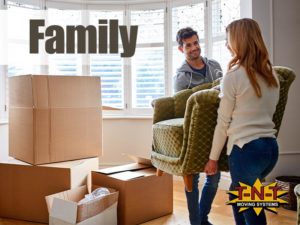 school year, a child will stand out less as a newcomer, but a month or two into the school year may mean that your child actually receives more individual effort from the school staff and teachers to adjust into the year. Moving early in the school year is much easier than moving mid-session. Timing your move right can make all the difference in how your children will adjust to change.

September through November is the sweet spot when it comes to the tricky balance of splitting time between travel and family. The closer you get to winter, the more holidays there are to plan around. If you move in the fall, you’ll be able to put 100% of your time, money, and energy into the holiday chaos, rather than worrying about moving.

Fall is also the cheapest season in real estate. Because 80% of the population is moving from April to September, the houses left on the market in the fall can be priced at much better deals in the off-season.

Is Fall the Cheapest Season to Move if I’m Not Using a Moving Company?

Just as the demand for a moving company becomes lower during the fall season, it also becomes lower for other moving-related rentals. Trucks to rent out are going to be at the lowest demand, alongside other moving equipment.

If you were avoiding hiring a moving company to save money, considering the savings you can get during the fall season might change your mind. Moving on your own, renting equipment to move yourself (think: moving trucks, renting dollies, moving helpers, etc.), and adding up the time it takes to move yourself may not break even with the hassle-free cost of hiring a moving company. By moving in the season with the least demand, you may be able to

So What Else Do You Need to Know About Moving in the Fall?

Start with a moving budget. Know what you’re able to spend, and monitor your moving expenses. It’s important to weigh out the cost and benefits of either hiring a moving company or moving yourself. If you choose to move in the fall, you now know that it’s the season with the least demand on moving companies. Moving companies may be willing to lower their rates and work with their clients during times of low demand.

Request a cost-estimate and compare companies. Get a quote and know what you’re getting into before booking a moving company. You should then compare those cost estimates and weigh-out if you’re getting the best price and the best quality. A moving company should do more than give you an estimate over the phone. Here at TNT Moving Systems, we can give a quote over the phone, but we recommend that the most accurate way for a moving company to provide an estimate is to conduct an in-house estimate. This ensures the client’s booking is scheduled for the appropriate amount of time and labor, and that there are no surprises on the final bill.

Reserve a moving company sooner rather than later. The top-rated movers in Charlotte, NC get booked far in advance, even in seasons of low demand. Don’t get stuck with a mediocre company or a date you don’t want if you choose to wait too long to book a company.

Are There Disadvantages to Moving in the Most Popular Season—Summer?

Summer runs June through September. During the summer, the demands on moving companies are the highest (remember, this is when 80% of the American population move), and the companies have little flexibility in their bookings, as well as in their prices. Moving in the summer can literally turn into working against the sun. You will have to plan ahead of time when it comes to packing heat-sensitive items, as the heat in the back of a moving truck can become extreme and damage items like electronic equipment, liquids, or plants. Moving companies will recommend that you start early in the morning (5-6 am) before the heat becomes too intense.

Moving companies in temperatures rising above 100 degrees may also have to cancel due to the real health risks of their staff. Likewise, the same can happen in the coldest, iciest months when roads become dangerous.

The summer sun is the strongest during the early to mid-afternoon hours. Applying sunscreen while moving is recommended at any time of the year when you’re spending hours moving between the indoors and outdoors. Consider using a sunscreen lotion that’s SPF 30 or higher to protect any exposed parts of your body, focusing on the face, ears, neck, shoulders, and arms. In the summer, it’s also recommended that you wear lightweight, breathable clothes as you move in and out of the house.

What Are the Best Times of the Week to Move?

Is There a Best Day to Move?

Sure, we can break it down even further. If you really want the best possible deal and you have the flexibility of taking off work, looking into moving on a weekday can bring in the ultimate savings. 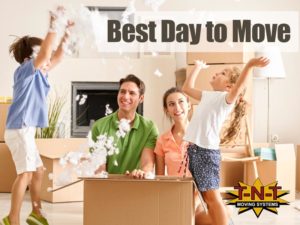 Because weekends are when a large amount of the employed population who work a standard 9-5, Monday through Friday job have off, weekdays are in the least demand for moving companies. Therefore, it’s best to choose a weekday to move. We recommend the window of Monday through Thursday for the best prices and lowest demand. By choosing a weekday to move, you will also have a better chance of booking the exact date and time you want.

Is There a Best Time of Day to Move?

Early birds do get the worm, at least when it comes to moving! Professional moving companies recommend that they arrive on the day of the move around 8 to 10 a.m.

Get a Quote From TNT Moving Systems!

What information do you need to have to get a quote from TNT Moving Systems? All you need is the address you’re moving from, the address you’re moving to, the size of the house, apartment, or condo you’re currently living in, and your desired move date. If you have the flexibility to choose a move date, we can work with you to help you get the lowest prices possible for your move.

Afterward, we can schedule an in-house survey to give you an accurate cost of moving.

Let TNT Moving Systems make your Charlotte move less stressful and more affordable this fall. Moving in the fall means you get your pick of moving dates, the lowest rates of the year, and fewer surprises and obstacles from Mother Nature. Fall into your next move now with TNT Moving Systems!