12 Most Family-Friendly Cities in North Carolina and the U.S. 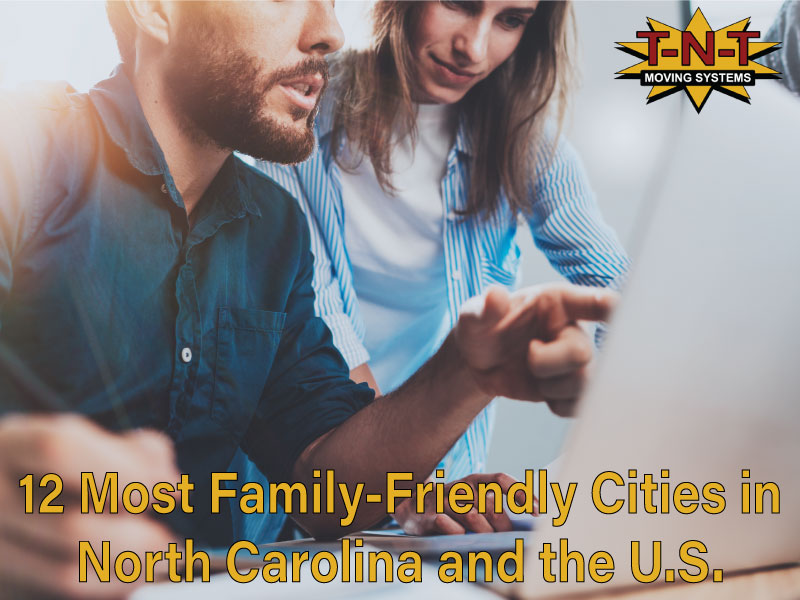 Nothing is more rewarding than raising a family, but it’s also quite stressful. There’s always something to worry about, whether it’s choosing the right school for your kids, making sure they get enough sunshine and physical activity, or finding a job that allows you to balance work and life.

Where you live significantly influences your family’s well-being. Most parents don’t want to raise their kids in a big city, but living too far in the country can require a lengthy commute, meaning less quality time with your family.

That’s why it’s critical to choose your home’s location wisely.

Many factors determine the ideal city for your family, including safety, the quality of schools, the local economy, and extracurricular activities. Below, TNT Moving Systems discusses the best overall cities for families in North Carolina and the United States.

North Carolina residents don’t have to go very far to find cities and neighborhoods that are perfect for families. Let’s take a look at six of the most family-friendly cities in the state:

A Raleigh suburb, Cary is touted by many outlets and authorities as one of the best places to live in the United States. Niche has long given it an A+ grade, and Safewise considers it to be the sixth safest city in America.

Cary, NC has a population of about 175,000 and offers a dense suburban feel and lots of coffee shops, restaurants, parks, and other attractions. It’s also home to many of the state’s top public schools. No neighborhood is 100% safe, but Cary has extraordinarily low rates of property crime, violent crime, and sex offenders, making it more likely for your family to lead safer, less stressful, and happier lives.

Concord, NC boasts one of the country’s fastest-growing economies and earned an All-America City award in 2004. Located in Cabarrus County, Concord is roughly 20 miles from the Charlotte city center and has about 92,000 residents.

Charlotte Motor Speedway is one of the premier attractions for NASCAR fans, but Concord also has plenty of recreational areas, parks, and health-and-wellness spots to benefit families. Further, HGTV ranked Concord’s downtown area as one of the most charming in the U.S.

Raleigh is the North Carolina state capital and the state’s second-largest city. It’s also among the fastest-growing cities in the nation and currently has a population of 400,000.

Raleigh ranks highly in overall safety and offers children and adults many dining, entertainment, and wellness options. The Coastal Credit Union Music Park, North Carolina Museum of Art, and Contemporary Art Museum are a few of the many worthwhile attractions. The city is also home to North Carolina State University, so there is an air of college life without it becoming overwhelming.

Moreover, Raleigh offers arguably the best culinary options in the state. There is a world-class restaurant, food truck, or you-pick farm everywhere you turn.

Wake Forest, NC is a beautiful small town with a thriving economy, which explains why its population has grown from 30,000 to 42,000 in the last 10 years. The town is situated in Wake and Franklin counties and boasts many pre-college education facilities, including Southeastern Baptist Theological Seminary, and Wake Technical Community College.

Falls Lake State Recreation Area, among many other parks and recreational spots, is ideal for nature lovers looking for relaxation. This could be your family’s city if you like eastern North Carolina but wish to live in a smaller town than Raleigh or Cary.

Greenville, NC has a population of about 93,000 and is frequently awarded for its offerings to young people, entrepreneurs, and professionals. East Carolina University is the state’s third-largest college with more than 30,000 students, but Greenville has many other higher education facilities.

There is also a range of venues where your family can enjoy sporting events, theater plays, music performances, etc. Greenville has lower-than-average crime rates and lots of greenery for the nature lovers out there. This could be the place for your family if you’re after better career opportunities without the drawbacks of a big city.

Home to about 20,000 people, Lexington has established itself as a commuter town for Winston-Salem and other nearby cities. T his city offers a plethora of employment opportunities because of the sheer number of businesses operating in various industries. Lexington is also known for its top-notch BBQ. Pigs in the City, Lexington Barbecue Fest, and many other festivals and events attract thousands of families annually.

Nature lovers also have plenty to do and see in Lexington. North Carolina’s second-largest lake (High Rock Lake) is only a few miles away, and you have a selection of parks and recreational areas to enjoy.

While North Carolina has many family-friendly cities, you’ll obviously have more options if you’re willing to move to another state. Here are some of the country’s top cities for laying down roots:

Tennessee is an excellent state for raising a family, and Franklin is the cream of the crop. A Nashville suburb, Franklin gives you access to big city benefits and comes with tons of history and charm.

With crime rates well below the national average and some of the best high schools in the state (and nation), your family will have everything they need to lead happy lives. Keep in mind that the cost of living is higher in Franklin than in any other Tennessee city, but you’ll also have more tax relief than in most other states. Tennessee requires no income tax, which is a big deal for homeowners, business owners, and professionals!

Franklin’s primary charm comes from its many pre-Civil war sites, including Carter House, Carnton, and the Lotz House Museum. The city also provides its fair share of adventure with a ropes course, aerial park, mini-golf facility, and the SOAR Adventure Tower. Plus, you’re only a short car ride from Nashville, but Franklin holds its own regarding barbecue and other culinary delights!

The Great Lakes surround Michigan, and the state boasts some of the lushest forests and most breathtaking beaches in the U.S. Ann Arbor is among the best overall cities for families for many reasons.

Yes, winter in Michigan is a serious matter; you must enjoy winter weather to live here, or you might be miserable for a few months out of the year! That said, nothing beats autumn in Ann Arbor. The family can enjoy scenic orchards, cider mills, corn mazes, hayrides, and other fall-themed activities. And you don’t have to worry about extreme heat in summer.

Niche ranked Ann Arbor number two for public schools. The city is also home to the University of Michigan, touted by Top Scholar as the second-best public university in the US. In other words, you won’t find a better area in the country for academic resources.

As with many other college towns, Ann Arbor offers a range of coffee shops, restaurants, and entertainment venues. You and the kids might also enjoy the Ann Arbor Hands-On Museum and the University of Michigan Museum of Natural History.

Naperville offers superior educational opportunities as well. Niche rewarded the city with an A+ for public schools and ranked it number one in the U.S. The city also earned an A for outdoor activities, and it’s easy to see why. The entire family has more than enough things to do – from swimming at Centennial Beach to taking a bike ride through Riverwalk Park and visiting a historic stone quarry.

There are a couple of drawbacks to living in Naperville. First, the cost of living is considerably higher than the national average (129.6/100). And the weather can be brutal during winter. Many residents discover that autumn, spring, and summer are beautiful enough to make up for it!

Florida is one of the best states to raise a child, and Nocatee is perhaps the best city in Florida for families. It’s located just two hours from Orlando, providing quick access to world-class theme parks without the overwhelming number of tourists.

Nocatee is a small town of 15,000 and only a 30-minute drive from Jacksonville, which offers plenty of big city entertainment and dining. Niche gave Nicotee an A for public schools, outdoor activities, and job opportunities. Its selection of family-oriented parks and neighborhoods inspired Newsweek to name Nocatee the best place to live in Florida in 2020.

This city is also close to Mickler‘s Landing, Ponte Vedra Beach, Atlantic Beach, and other signature beaches. It really is in a prime location. Plus, the Nocatee Splash Park only grants access to residents, meaning your family can have loads of fun without dealing with large crowds.

The cost of living in Scottsdale, AZ is 14 points above the national average, but that’s one of the only disadvantages of living there. AreaVibes gave Scottsdale high marks for crime rates, median household income, high score test scores, and high school graduation rates.

Another factor that makes Scottsdale stand out is its wide range of wholesome activities for children and adults. The massive butterfly conservatory Butterfly

Wonderland and the OdySea Aquarium at the Arizona Boardwalk, are must-see destinations. Summertime brings scorching temperatures in Scottsdale, but you can take the kids to the Great Wolf Lodge Water Park throughout the summer to cool off and relax. And there are many top-notch outdoor activities to enjoy during the other seasons (e.g., Camelback Mountain, Sunrise Trails, Tom’s Thumb, etc.).

Scottsdale is one of the best cities on this list for parents. You’ll have your fair share of casinos, restaurants, and spas for your date nights!

If you’re looking for quick access to a big city without giving up a small-town feel, The Woodlands, TX is the ideal city. It’s about 30 minutes north of Houston and was recently ranked the best city to live in America by Niche.

As with Nocatee, FL, The Woodlands is technically a planned community. The township holds annual concerts at The Pavilion, top-notch Fourth of July celebrations, and Christmas tree lighting and ice skating events.

You must love the Texas weather to enjoy the Woodlands, but it is hands-down one of the best cities for raising a family in the Lone Star State. As part of the Conroe Independent School District, The Woodlands is rated 54% above average for public schools, and you’ll never have to worry about finding an activity that you and your kids enjoy. Between splash pads, children’s museums, and an aerial course, your family will be set up for some stellar weekends!

Raising kids is among the most rewarding and stressful experiences someone can have. It’s essential to live in a safe area that gives your family everything you need to live healthily and happily.

Each of the cities above can provide that, but keep researching to determine precisely where your family should live to lead the lives you envision. And, as always, reach out to the experts at TNT Moving Systems to learn how we can securely and efficiently move your household items to the new home!